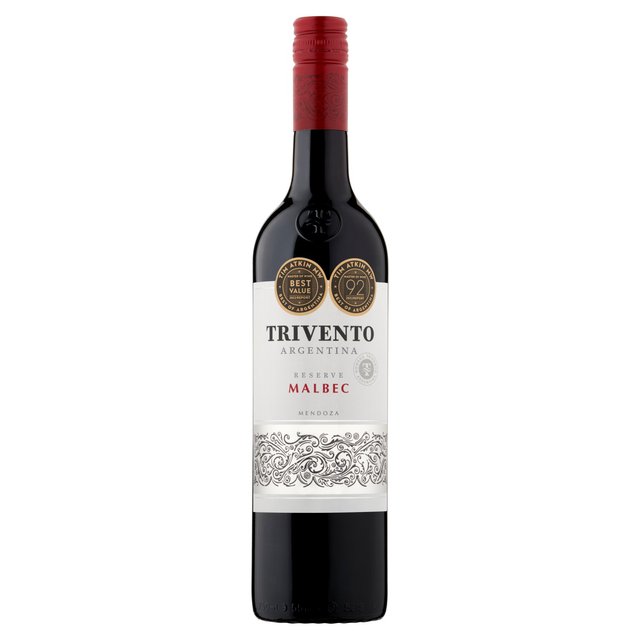 Offer price £6 when you order by 31/03/2020. Offer subject to availability. Maximum 20 promotional items per customer.

Ideal with meats and tomato dishes

Trivento
The name Trivento comes from three winds; Polar, Zonda and Sudestada. It is these winds that make Mendoza such a distinctive and successful wine growing region.
Awards won on 2018 vintage: IWSC Silver & The Drinks Business Silver

A brilliant intense red with bluish, violet hues. Aromas of cherry and raspberries and perfectly infused with notes of vanilla and coconut imparted from the 6 months aged in French oak barrels. Well balanced, Trivento Reserve Malbec exhibits sweet tannins and a velvety finish

Founded in 1996 by Vina Concha Y Toro, Trivento Bodegas y Vinedos produces brand-name wines under their own label. The company has created an ample portfolio of wines distinguished for preserving the character of the Mendozan terroir. These wines have received numerous recognitions at international contests and in wine industry publications. In their short trajectory, Trivento has become the most diversely distributed Argentine wine brand in the world positioning the positioning the company among the preeminent Argentine exporters.

The Mendoza Province is one of Argentina's most important wine regions, accounting for nearly two-thirds of the country's entire wine production. Located in the eastern foothills of the Andes, in the shadow of Mount Aconcagua, vineyards are planted at the some of the highest altitudes in the world with the average site located 1,970-3,610 feet (600-1,100 meters) above sea level. The principal wine producing areas fall into two main departments-Maipú and Luján which includes Argentina's first delineated appellation established in 1993 in Luján de Cuyo. Situated in the upper Mendoza valley, where the river is half-way through its journey from the Andes mountains to the eastern plains, many Lujan de Cuyo vineyards sit at altitudes of around 1000m (3280ft). Malbec in particular is successful in Lujan de Cuyo, but the appellation also produces good Cabernet Sauvignon, Chardonnay and Torrontes. The majority of the vineyards are on alluvial soils; sandy or stony surfaces on clay subtrata.

The grapes were de-stemmed and crushed, before being macerated. Then grapes were fermented for 15 days in stainless steel tanks at 25-29ºC. The wine was then aged for 6 months in American Oak barrels and 5 months in the bottle.

Love this wine you will not be disappointed .

Leaves a nasty taste in the mouth. Very rough

A very gentle drink, no need to rush. one to have with friends on a long relaxed and evening. smooth, and deep, no sharp twang like with many red wines. Really enjoy this one, so much, I give it a 5* rating!

Goes great with steak or beef dishes. Silky smooth and rich with flavour. Will definitely be buying again

This is a Malbec I regularly buy, it's a firm favourite in my house. The great fruity flavours go perfectly with any beef dish. But it's so smooth it can be drunk whilst cooking too!

A nice wine to have in stock, ready for drinking

It made a good glass to drink before our meal, and then went well with our spicy chicken dish. I would be very happy to buy it again - We are seldom disappointed by Argentinian wines.