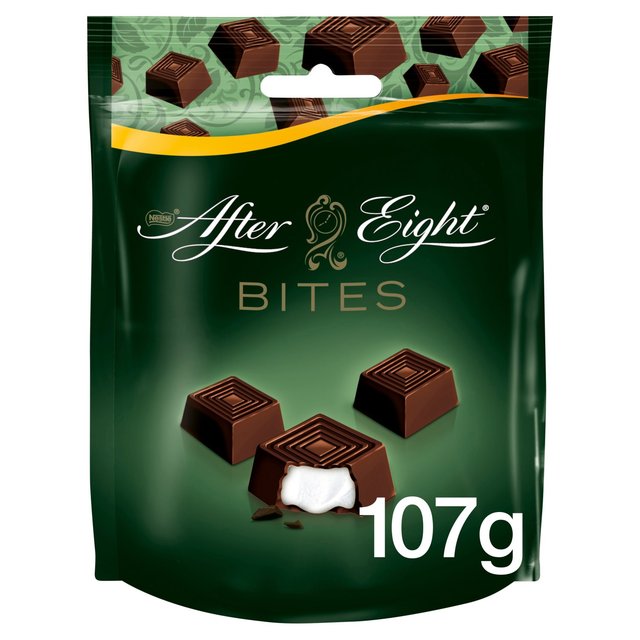 Offer price £1 when you order by 23/06/2020. Offer subject to availability. Maximum 20 promotional items per customer.

Square pieces of dark chocolate filled with refreshing mint fondant, each small piece makes a perfect little After Eight treat. Refreshingly minty, AFTER EIGHT Bites make the perfect treat using the same iconic minty taste as the original AFTER EIGHT mint however as a bitesize, treat version. AFTER EIGHT has been at the heart of the British nation since 1962 when it was launched in order to tap into a gap in the market for Rowntree's for After Dinner chocolate mints. Rowntree's therefore decided to develop a wafer thin mint, and AFTER EIGHT was born. Since launch AFTER EIGHT has been proudly produced in West Yorkshire, initially in Castleford before moving to Halifax in 2013. Over the years, there have been several memorable advertising campaigns including, perhaps the most iconic, 'Dinner Party' campaign in 1999 featuring Stephen Fry, Niomi Campbell and Marilyn Monroe. Today, AFTER EIGHT continues to be a firm British favourite with over 280m individual sweets enjoyed every year in the UK.
Flavoured with 100% natural peppermint oil, Contains no artificial colours, flavours or preservatives

Store cool and dry
For Best Before End See Base.

Storage:
Store cool and dry
For Best Before End See Base.

After Eight
Have you enjoyed the classic After Eight mints recently? Still the nation's favourite after dinner mints, the perfect balance of dark chocolate and refreshing mint fondant in wafer thin pieces, each in their own crisp envelope, round off a meal beautifully. They are squares seen in the best circles.
www.facebook.com/aftereight
www.twitter.com/aftereightUK

Good to remember
Enjoying chocolate as part of a varied, balanced diet and a healthy lifestyle is one of life's little pleasures.

These are a combination of after eights meets frys bars. My new favourite and will be ordering these regularly.