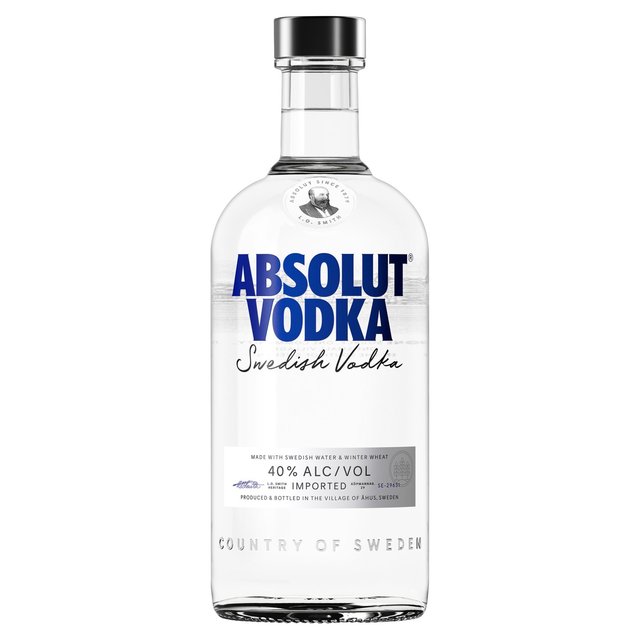 Absolut Vodka is one of the most famous vodkas in the world.
The main ingredients in Absolut Vodka are water and winter wheat grown in the fields of Åhus, Sweden. The water comes from a deep well in Åhus where it's protected from impurities.
With its refined nature and no added sugar, Absolut vodka blends perfectly with other aromas, enhancing the taste of your drinks.
One source

Simply pour over ice, add soda and garnish with lime or use in any of your favourite vodka cocktails. Try in an Elderflower Collins or an Espresso Martini.

Absolut
Absolut Vodka has completely redefined the premium vodka landscape, becoming synonymous with art, culture and nightlife. By starting a revolution in cocktail creation and launching a range of flavours never before seen on the market, Absolut has become an icon in its own right. It has been produced at the famous old distilleries near Ahus in accordance with more than 400 years of Swedish tradition. In 1879, Lars Olsson Smith, its founder, introduced the continuous distillation with which he made Absolut. Instead of the usual three or four times, the vodka was distilled an infinite number of times. At Absolut, not only do we source all the ingredients locally, we have also made our distillery one of the most energy-efficient in the world. Today, Absolut has a CO2 neutral distillation.

The Absolut Company AB,
Åhus,
117 97 Stockholm,
Sweden.
One Source - Purpose: Every ingredient in Absolut Vodka comes from a small village in Southern Sweden called Åhus, making Absolut the world's largest locally produced vodka. Did you know? Absolut deals directly with its suppliers rather than buying wheat from the global market. These relationships ensure that each bottle, no matter where you are in the world, is made with genuine pride

Excellent quality vodka, but always worth looking out for the offers below £20